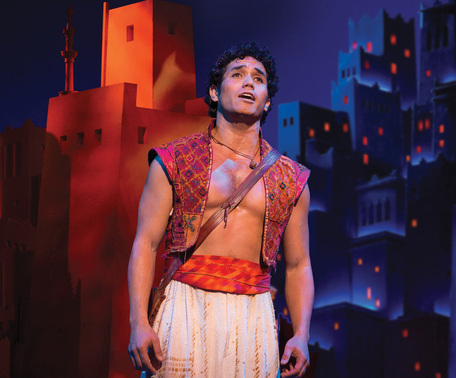 Adam Jacobs is no stranger to the Broadway stage! Currently, he can be seeing riding magic carpets, dancing with the Genie, and singing his heart out eight times a week as Aladdin in Disney's Aladdin the Musical.  Previous theatrical credits include Les Miserables (Marius), The Lion King (Simba), and Mamma Mia (Sky), along with numerous others. Adam and his wife, Kelly recently welcomed twin boys, Jack and Alex.
Follow Adam @AdamJacobsNYC or visit his website www.AdamJacobs.net.

We had the opportunity to ask Adam some questions about his career & playing Aladdin! 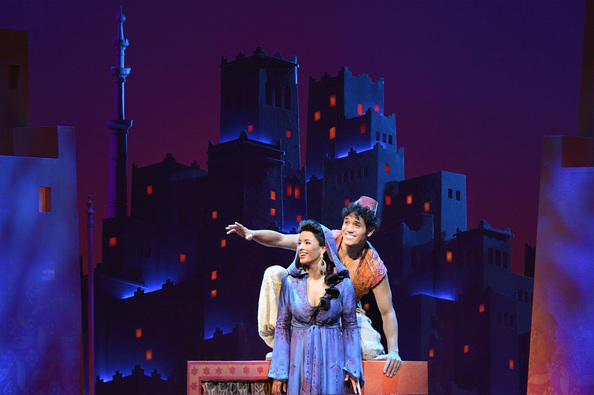 ﻿﻿STAR STRUCK MEDIA: You’re no stranger to being in New York City, what do you enjoy most about being back in the Big Apple on Broadway again?﻿
﻿
ADAM JACOBS: After doing many national tours and regional gigs throughout my career, there’s nothing better than being home in NYC and performing on the Great White Way.  Ever since I started working in theater that was always the goal— to be living in NY and making a living here while doing what you love.  Also, there’s such an amazing sense of community among Broadway artists.  It feels great to be a part of that again, all working towards helping Broadway Cares Equity Fights Aids, or bringing light to various other worthy causes, and generally just supporting and encouraging each other.

STAR STRUCK MEDIA: You are playing Aladdin every night on Broadway, was there a moment when it just sort of came into realization that you are portraying one of the most famous Disney characters?

ADAM JACOBS: I think it was right before the Tony’s that I realized the magnitude of my responsibility as Aladdin.  I was bringing a character to life that people loved and cherished from their childhood and I wanted to make sure I did it justice.  It’s been a thrill performing the role every night, but that night of the Tony’s especially was one where I felt like I was having an out-of-body experience.
STAR STRUCK MEDIA: Do you have a scene or a song that you perform that you are just always so excited to do each night?

ADAM JACOBS: My favorite song to sing in the show is “Proud of Your Boy”.   It’s such a beautifully written song by Alan Menken and I just love singing it every night.

STAR STRUCK MEDIA: You are running and dancing all around the stage which is what street rat-becomes-Prince must do, what is your routine to keep up with the physical demands of the role?

ADAM JACOBS: I make sure I really warm up and cool down like every good actor should.  In addition to that I have a series of exercises I do specifically designed to increase my agility and coordination.  Believe or not I like to juggle right before I go onstage to help get myself focused.  I need to make sure I concentrate every show so I don’t get accidentally get stabbed by a scimitar or fall from one of the buildings!

STAR STRUCK MEDIA: The show itself is just magical, and I’m sure the flying magic carpet gets some gasps from the audience all the time, do you have moments like that on-stage where you are still overwhelmed by all the aspects of the production?

ADAM JACOBS: I love hearing the audience react to the flying carpet.  I can actually see faces to about six rows back and when you see those enraptured faces of children and adults alike staring up at you it’s quite fulfilling.  I also feel overwhelmed at the end of “Friend Like Me."   The audience response we get every night from that number is phenomenal and unlike anything else I've been a part of.  I can only possibly compare it to the audience response after the opening number of The Lion King.  Both Disney shows of course :)

STAR STRUCK MEDIA: Do you have any pre-show rituals before the show? Maybe one involving a lamp? Haha

ADAM JACOBS: Pre-show rituals include juggling, a little weightlifting, stretching, jumping, running in place, and I love having just a little bit of coffee about 45 minutes prior to showtime.  I prefer an almond milk latte from Oren’s coffee but if that’s closed I go with a soy skinny vanilla latte from Starbucks.

STAR STRUCK MEDIA: You have played some iconic roles on stage throughout your career, and are becoming an icon for many as you now portray Aladdin, who were some of your icons growing up and how did they influence you?

ADAM JACOBS: I once saw Yul Brynner play the king in The King and I  and he was very inspiring to me.  I also loved watching the actors of the classics— Jimmy Stewart, Gene Kelly and Donald O’Connor.  My greatest hero however was my high school drama teacher who was a mentor to me and encouraged me to pursue a career in the arts.

STAR STRUCK MEDIA: As a child, I’m sure you didn't ever imagine you would be playing Aladdin, so was he a Disney character you favored and what would your young self say now if he saw what you were doing up on stage every night?

ADAM JACOBS: You're absolutely right that I never imagined as a kid that I would get the chance to play Aladdin in a Broadway musical.  If somebody told me that then I would’ve thought they were nuts.  But maybe if I was shown definitive proof, like a video from the future sent through a time machine or something, then I probably would’ve said something like, “Cool!  That looks like a fun show!  Is that what I’m going to look like??”

STAR STRUCK MEDIA: What would you say is the most rewarding aspect about being Aladdin?

ADAM JACOBS: Besides having my mom being “proud of her boy,"  it would have to be the appreciation of the many fans of all ages from all over the world that I get to see backstage and at the stage door.  It makes me feel lucky and grateful to be where I am and while other people might start to get a big head hearing praise, I feel like it does the opposite for me.  When kids say to me “it’s my first Broadway show! And it was great!” and their parents thank me, I know I’m where I’m supposed to be.

STAR STRUCK MEDIA: Before we finish up, here are a few quick-fire questions:

o   Favorite spot in NYC? Bryant Park and Central Park in the summertime.

o    Song that you can’t get enough of right now?  “Don’t Stop Believing” by Journey.  Can never have enough Journey (or Bruno Mars).

o    If you could switch roles with anyone on Broadway now who would it be/what role?  Michael C. Hall in Hedwig.  Rock it out!

STAR STRUCK MEDIA: Again we thank you for chatting with us, so if you could say anything to the fans of Aladdin right now what would it be?

ADAM JACOBS: A million thanks for being such awesome fans!  I love receiving your fan mail and try to make it a point to make sure I greet everyone at the stage door who decides they want to wait to meet the cast.  Feel free to follow me on Twitter and Instagram at @AdamJacobsNYC or check out my website at AdamJacobs.net.  And may all your wishes come true!

Aladdin the Musical is playing at The New Amsterdam Theater on Broadway.
Tickets on sale at www.AladdintheMusical.com